Mark Lynch, Australian cartoonist was born sometime during the last century. He was mistakenly thought to be a war baby as his parents began fighting soon after setting eyes on him.

Leaving school at the age of 15 after a strong recommendation from the Marist Brothers, he held down several jobs (some for up until a month at a time) before winning his first lottery at the age of 20, which allowed him to wear khaki clothing and shoulder a rifle. The common name at the time for this indentured servitude was, National Service!

After doing his time in 'Nam, (Nambucca Heads) he became a Qantas Flight attendant, and for the next 19 years his life resembled an exotic beer commercial set in a variety of worldwide locations.

In what doctors now diagnose as a brain explosion, he bought a restaurant in Paddington, Sydney, which he ran for ten years.

This allowed him to develop an allergy towards real work and became a cartoonist, where he was able to hide behind his pen (and a series of aliases and avitars) and poke fun at those less fortunate than him. This disguise enabled him to take the mickey out of politicians of all persuasions during his time as Editorial cartoonist for 'The Australian 'Newspaper.

Mark is the recipient of 57 National and international cartooning awards and lives in Sydney Australia with wife Jennifer, and sons, Patrick and Jack. 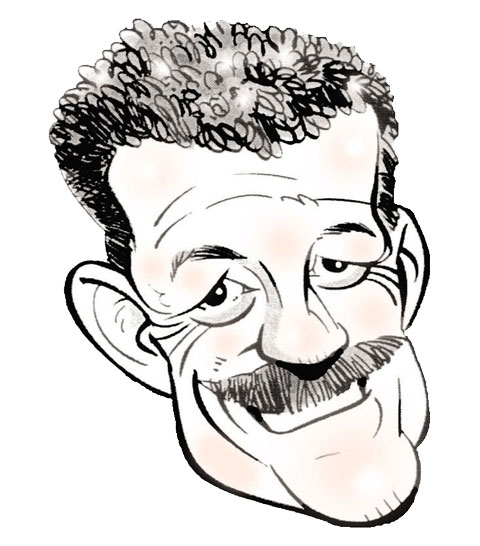 In THE GRIN BIN, Mark Lynch leaves none of the worlds or the universe's hilarious ambiguities and contradictions unexploited.- Thomas Keneally

This book is a joke! - Andrew Denton on The Grin Bin

Funny as a hatful of monkeys - Reg Mombassa

Smile raises a laugh with the eyes but the real movement is in the trousers. - H.G.Nelson on SMILE

Just what we need. An uplifting book from a man called Lynch - John Clarke (aka Fred Dagg) on SMILE

I belly laughed at many of Mark Lynch's wonderful cartoons even as I recognized that he is making us face the crisis that confronts all humanity. I wish I had his ability to make his points and am grateful to have him as an ally - Dr. David Suzuki on 'How Green is My planet?'

If only the world leaders would feel as strongly about the environment as does Mr. Mark Lynch. - Spike Milligan on 'How Green is my planet?'

Out to Lynch! - Penthouse magazine

Mark Lynch is off the planet! - People magazine

Mark Lynch has the gifts of the story-teller and the cartoonist. He can make us both laugh and think. - Prof. Manning Clark